My husband's sister and her husband have birthdays very close to each other in March, and I find both of them a bit difficult to buy for each year.  This year my hubby suggested that we get them the BBC series Sherlock on DVD, which I thought was a great idea.  Now, just giving a DVD is a bit boring, and as a paper crafter you know I just had to dress it up just a 'little'. 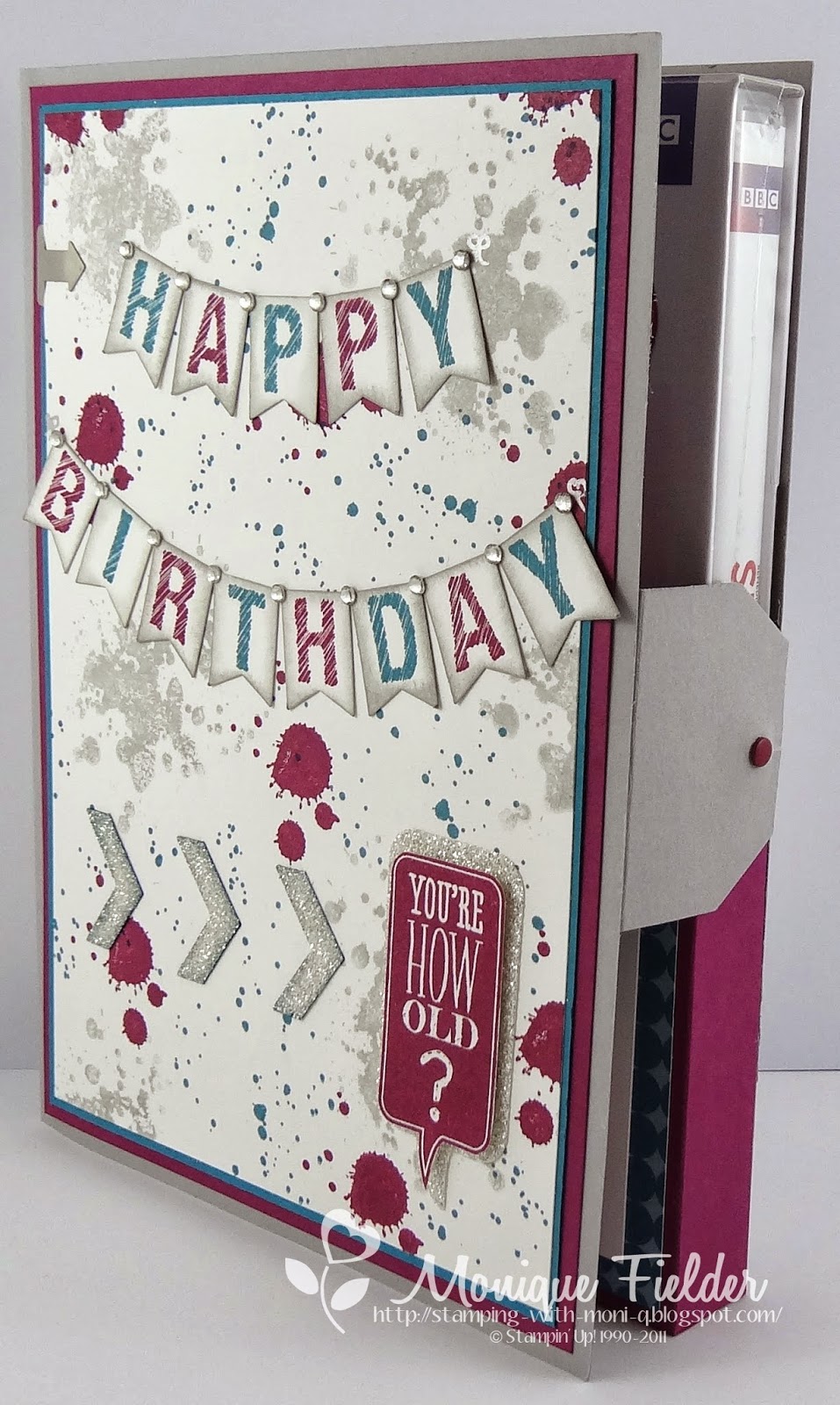 I decided to make a cover for the DVD, and include on the inside some microwave popcorn to add a 'movie' experience feel to the gift. I also wanted to design something that was neither masculine or feminine as it would be a joint present for both of them.  Here you can see the front cover on which I have used Gorgeous Grunge (gosh I hope this doesn't retire this year!) stamped in Rich Razzleberry, Island Indigo and Smokey Slate.  Take note of the Just Sayin' stamp on the cover, I cut this by hand and then layered it over Silver Glimmer Paper, adding some Silver Glimmer Paper punched with the Chevron Punch to the card front.

I used the Tag Topper Punch to make a clasp to hold the cover in place, adding a small magnet to both this and the DVD pocket.  The Razzleberry Candy Dot finishes off the clasp. 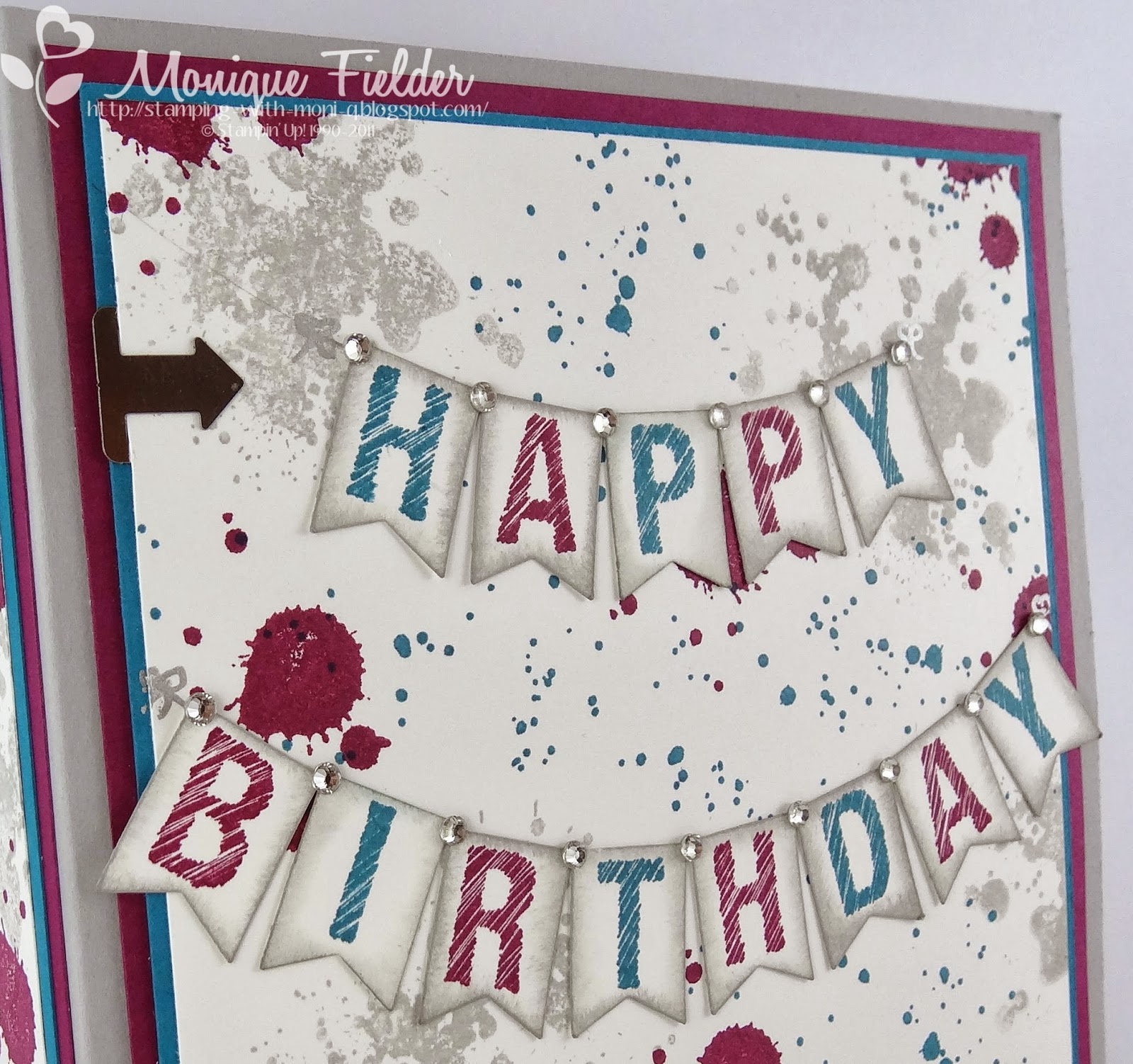 I made a cute little banner with the Banner Punch and the stamp set "ABC - 123 Sketch Alphabet & Numbers".  This is a great set that I overlooked for some time but it fits perfectly in not only the banner punch but a number of our other punches as well.   After adhering the banners to the front of the card I put a small rhinestone between each to give some bling.  I also added a cute little paper clip from the Essentials Hardware Clips.  The photo doesn't pick up the sparkle, but in person it really was quite blingy. 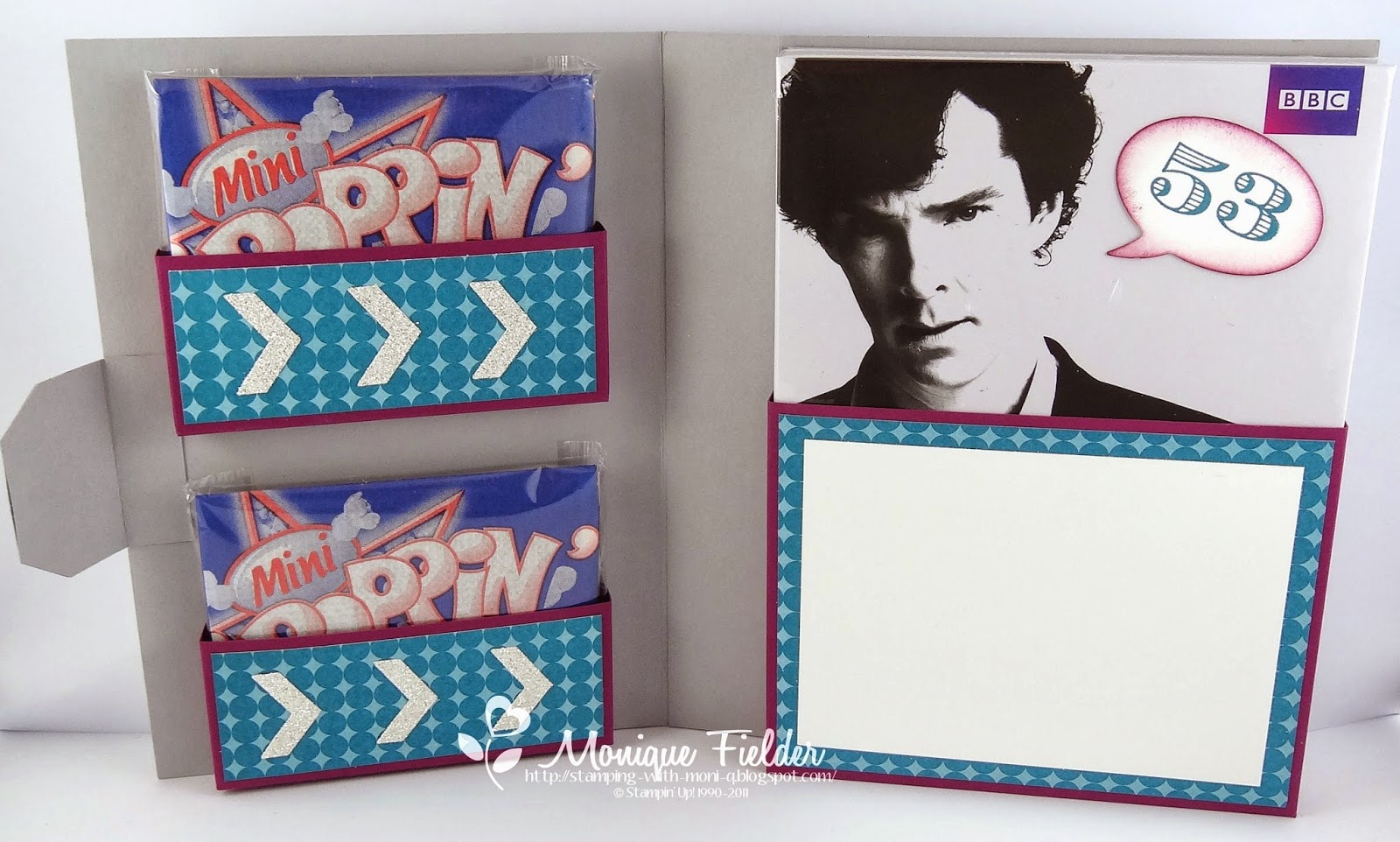 This is the inside of the 'card', you can see I made a couple of pockets on the back of the cover to hold the two mini popcorn packets, adding Chevrons in Glimmer Paper to these to tie in the theme from the front.  I just loved the expression on Benedict's face and decided to add a speech bubble with their age!  The panel is for writing the message.


I took some measurements and plan to write up a short tutorial for this, it is a bit bigger because the DVD set is of all three seasons, but the idea would work for normal sized DVDs or even a clear mount stamp set, you could add an ink pad and some embellishments to the pockets instead of popcorn.

The good news is they both loved the gift!

Posted by Monique at 9:00 AM No comments: Links to this post 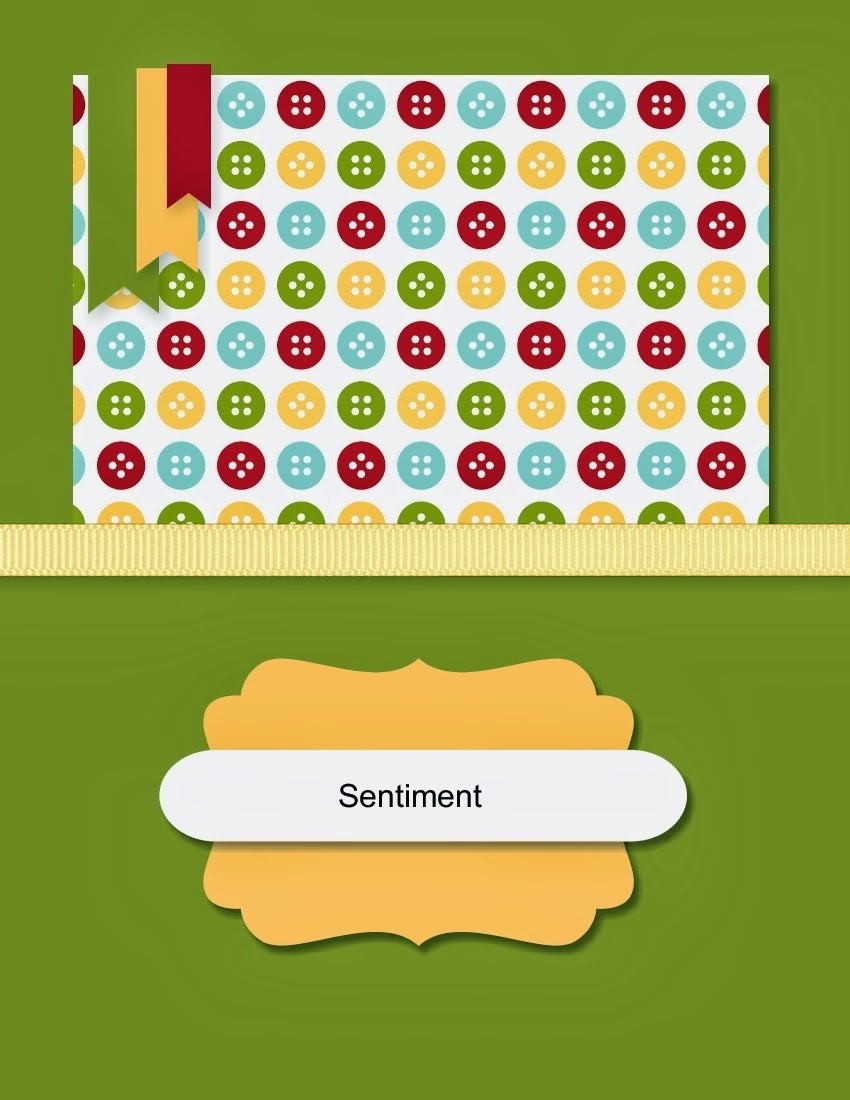 Isn't this a cute sketch from Sketch Frenzy Friday this week?  I thought there was the opportunity for some cute elements so got creative. 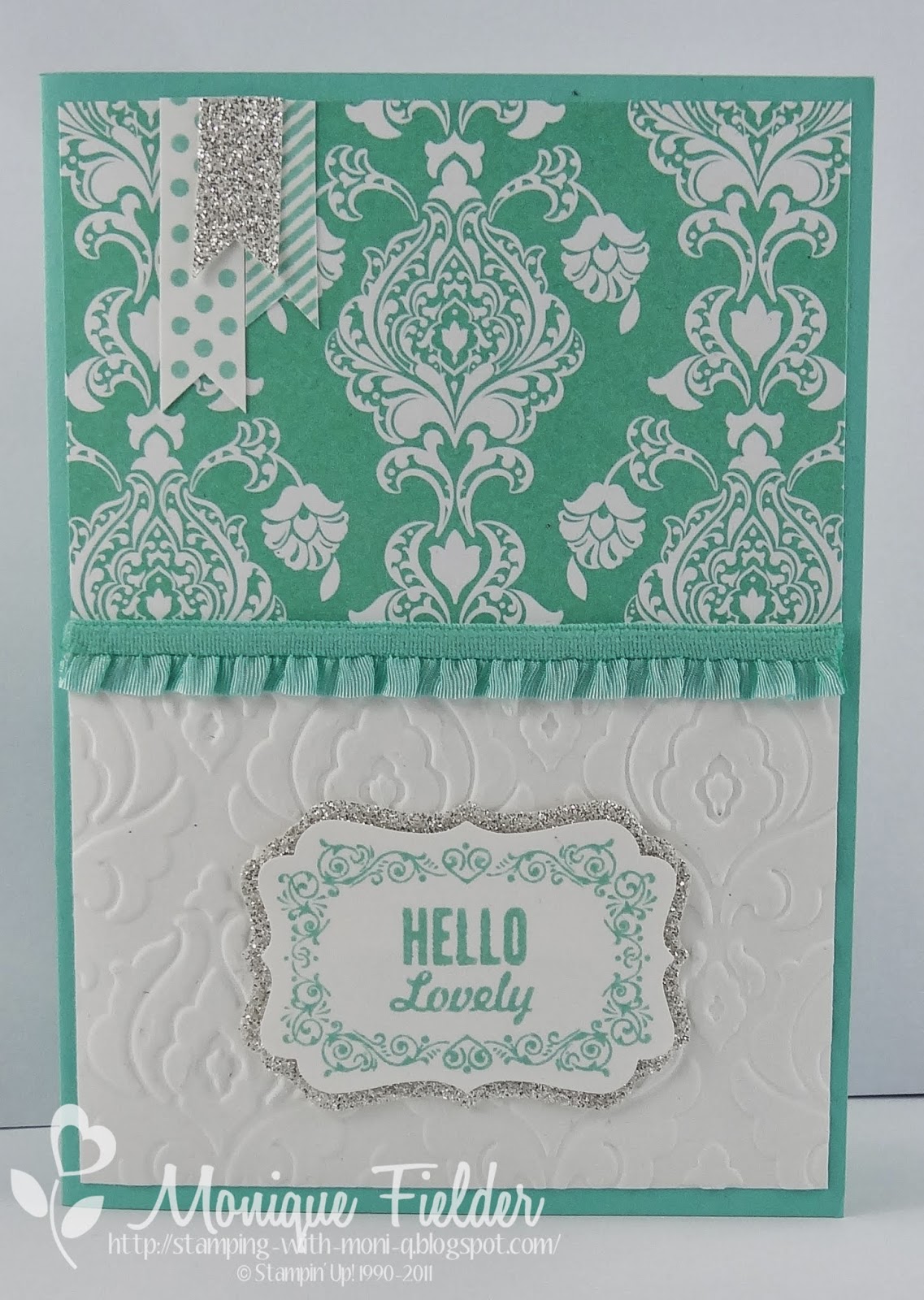 I love love love Coastal Cabana, it is such a fresh and clean colour and the DSP in Eastern Elegance has some beautiful patterns using it. This pattern goes beautifully with the matching embossing folder and of course adding some Silver Glimmer Paper added some lift to the card.  Once I made this I immediately thought of the animated movie Frozen! 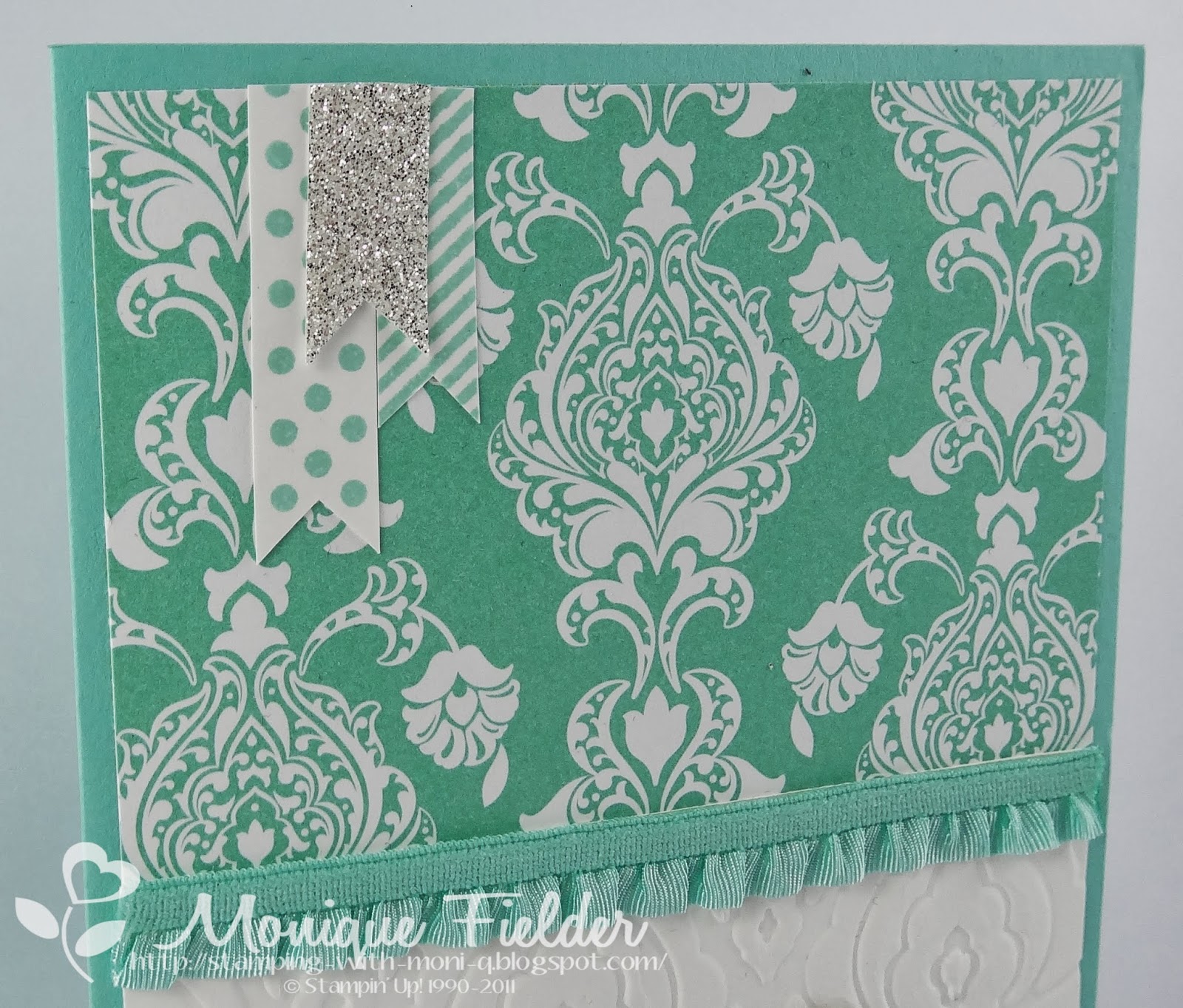 This is a close up of the little flags I used two of the images in Perfect Pennants, a set in the new Occasions Catalogue, I think they are just the right thing for this card, perfect you might say ;)

Posted by Monique at 6:37 PM 3 comments: Links to this post 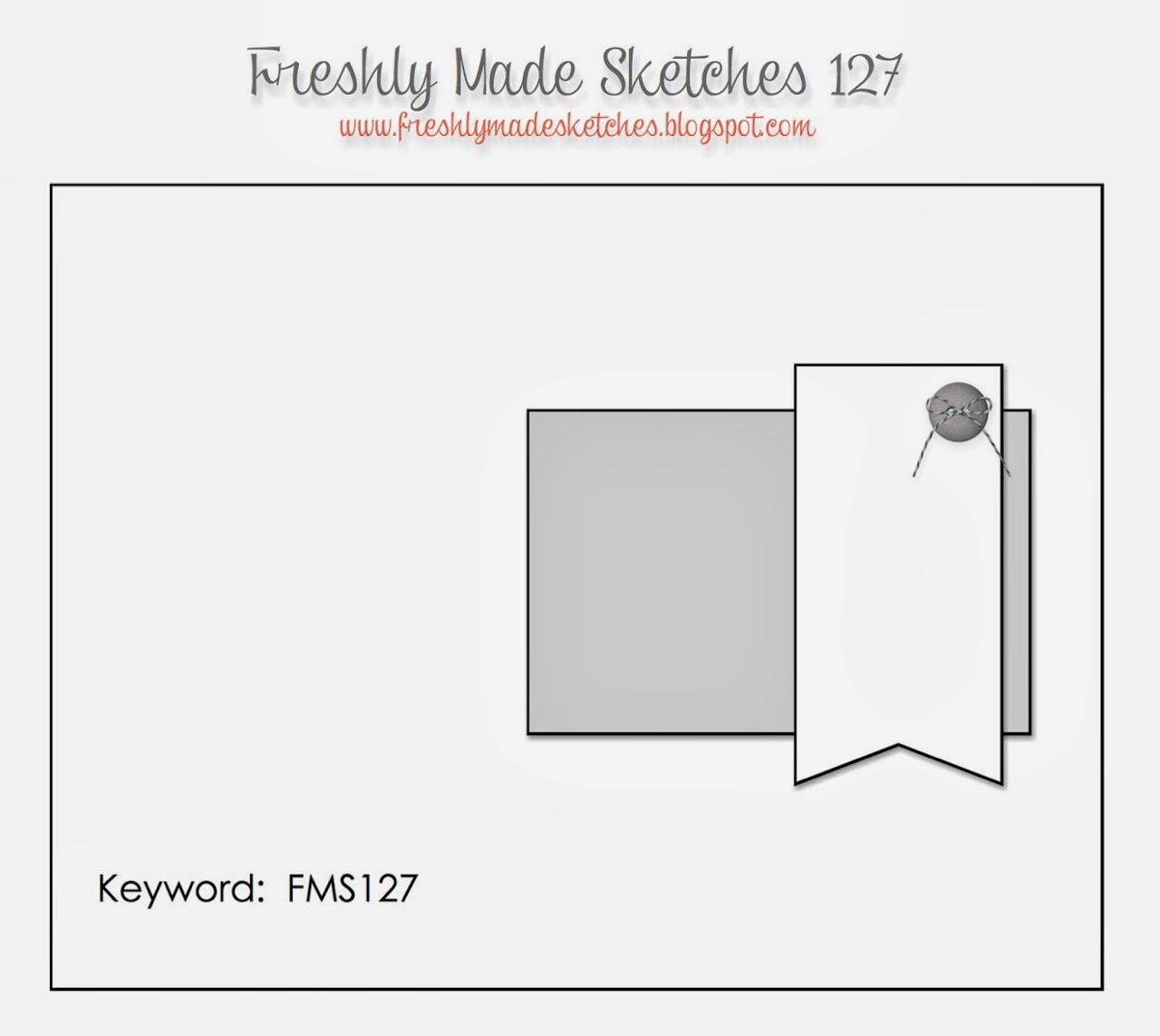 I just love the Sale-A-Bration DSP and the 2013-15 In-Colours and The chance to use both in the Just Add Ink and Freshly Made Sketches challenges was right up my alley. 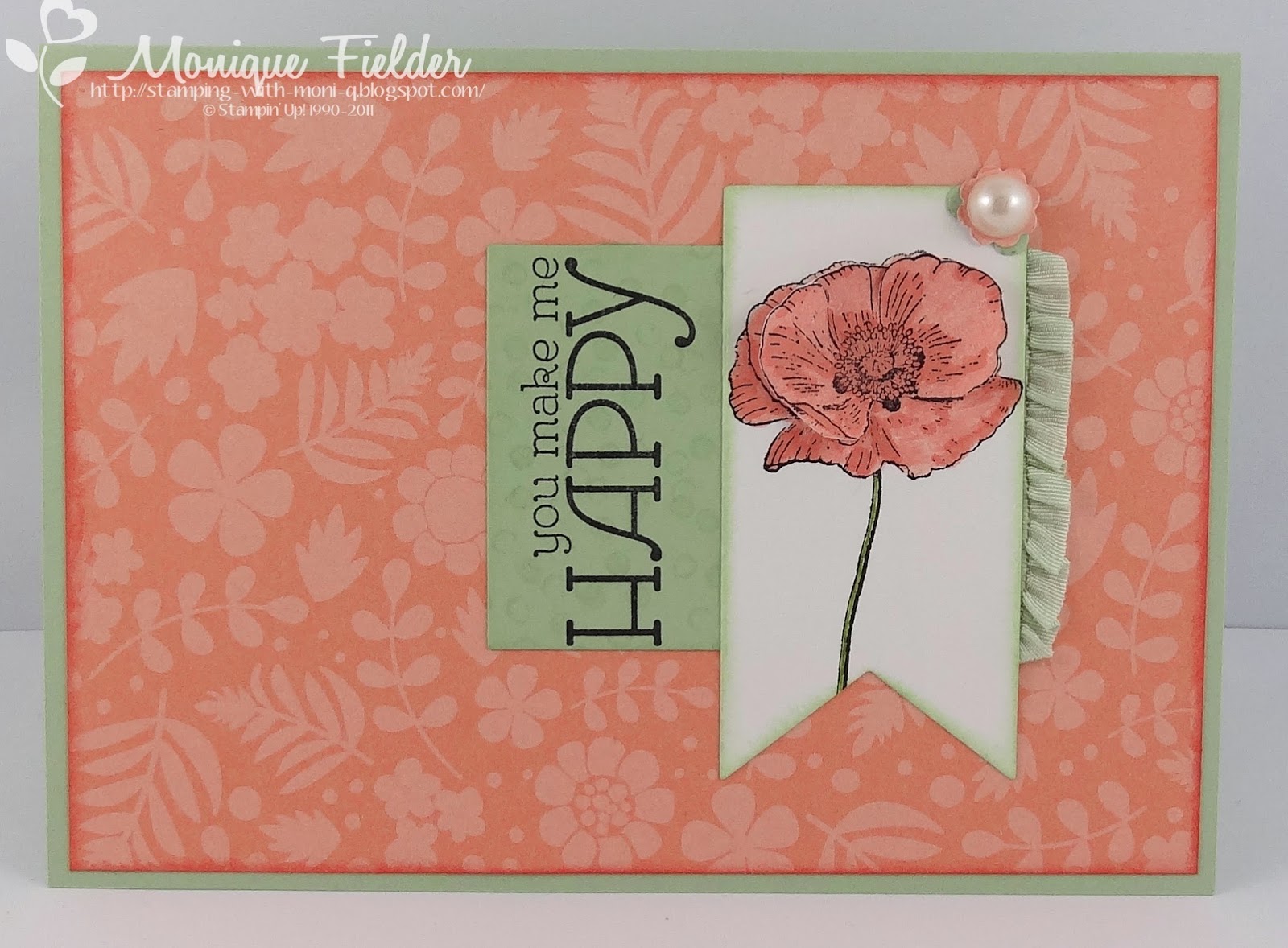 I was a bit taken with the sketch and wanted to use my new stamp set Happy Watercolor, I also knew that the Sale-A-Bration Sweet Sorbet DSP would go perfectly with the poppy, and give some pretty interest to the background.  I quite like sentiments put on sideways, particularly with this type of sketch, and I wanted to use Pistachio Pudding Ruffle Ribbon on the right of the flag instead of taking the card stock all the way across.  I think it gives a pretty feel to the card. 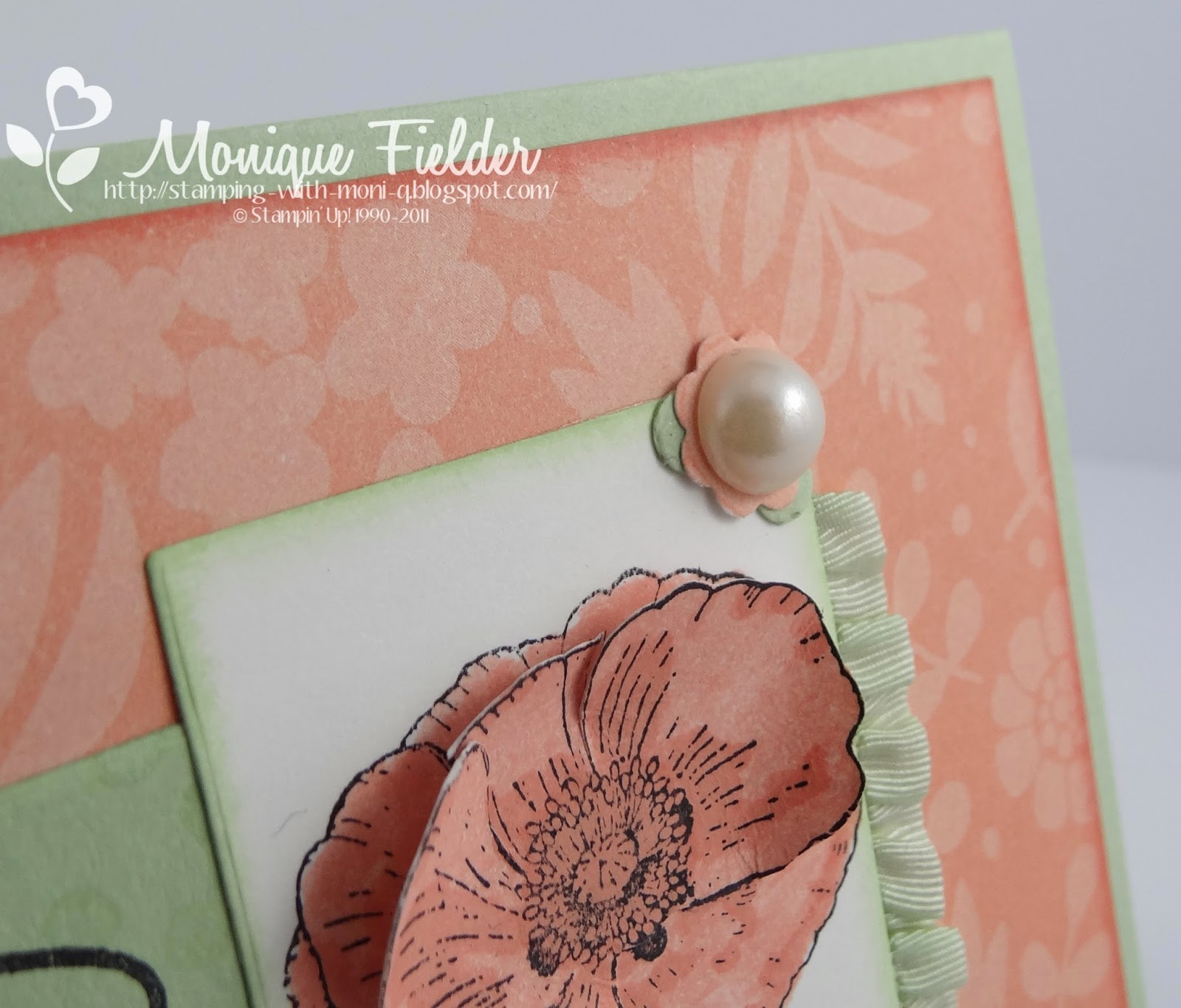 I wanted to show you a close up of the flower and embellishment.  I cut part of the poppy  from a second image and layered it over the main image.  I also cut down between the petals so they would curl up independently.  The small embellishment was made using two of the punches from the Itty Bitty Shapes Punch Pack, the scallop circle as the flower and the four petal punch as the leaves.

Thanks for stopping by, don't forget to visit both of the challenge sites to check those creations too.

Posted by Monique at 7:05 PM 7 comments: Links to this post 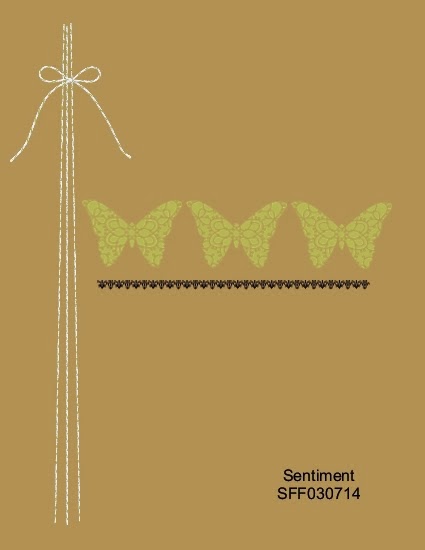 Just a quick post from me today to share my entry in the Sketch Frenzy Friday challenge. 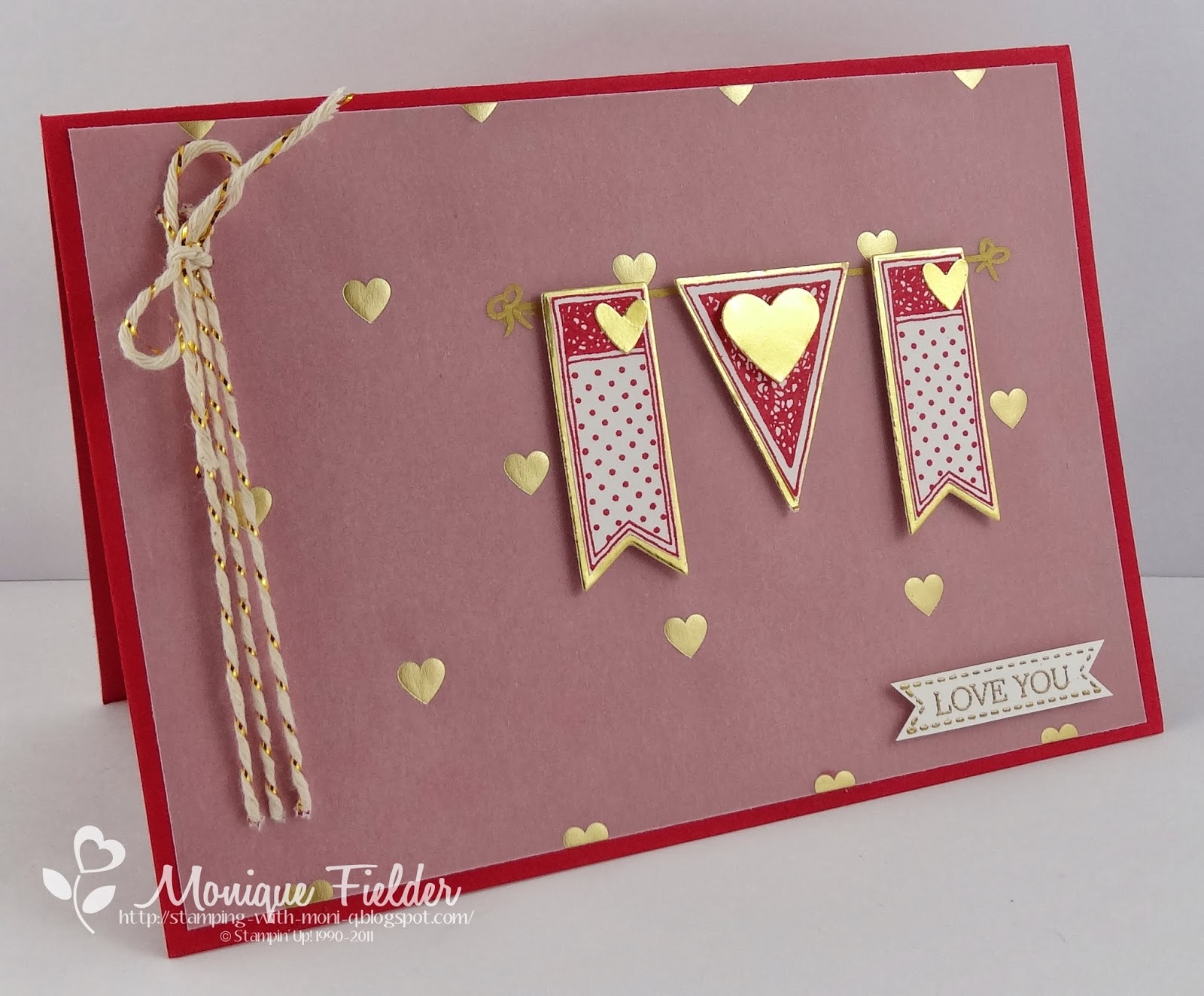 I haven't used my Language of Love stamp set much and I thought this sketch was the perfect opportunity to have a play, I was initially going to use the heart stamp in the centre but it didn't look as good so went with the triangle instead.  The best thing about this stamp set is that every shape matches one of Stampin' Up's punches or Framelits!  Here I actually cut each one by hand (not to bad with all the straight lines) and then layered them onto the punched and die cut shapes so there is a little border of gold showing around the edge.  I punched some hearts to match in with the gold embossed vellum on the background, and added Gold Baker's Twine threaded through three little holes to finish off the card.  I just love how the gold all matches together.  A bit late for Valentines Day, but why wait for a special day to tell someone you love them?

Posted by Monique at 9:54 PM 3 comments: Links to this post

Storage By Stampin' Up!